Hey Quite the Chap here for golfersRX and in todays How to Shoot in the 80’s series we’re going to dial in our lag putting…in today’s 60 second video.

There are a lot of factors that can go into a lag putt so we’re going to break this down into very easy steps. Break it down into smaller putts. Literally.

What you’re doing here is training yourself to see smaller more manageable putts when faced with a longer putt. While your buddies chip up on the green or line up their putts, you can quickly break your putt down so it doesn’t seem so intimidating.

Lag putt? You mean my two twenty footers, pffft, I got this.

Until next time keep it simple. 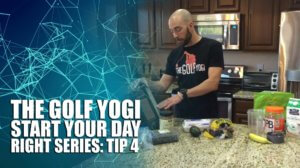 Tip 2 – Eat Your Greens Outside – Start Your Day Right